Live from Neill Dixon’s house, it’s the 2021 Canadian Music Week Conference. Call it a sign of the times if you will but Canada’s 38th annual national music industry gathering set to run between Tuesday, May 18th to Friday, May 21st will go totally virtual.

This means that delegates who register for this year’s conference will need to communicate, and network with the 250 or so guest speakers online. All the artists registered for this festival’s talent showcase will have to pre-record their performances and all of the CMW’s trademark gala award dinner events have been eliminated with just the Jim Beam Indie Awards going ahead virtually with appearances by July Talk, MONOWHALES, Sam Roberts Band, and Half Moon Run performing live, and streamed from the El Mocambo on Sunday, May 30th.

“It’s a massive challenge because it had to come off a year of financial losses due to the COVID-19 epidemic,” noted Dixon CMW President. “When we had to cancel the initial 2020 festival in May, everything was already booked and then we had to reset it again for September and then we had to cancel it again! So around December, we decided we were not going to book another live event, that we would go virtually instead.”

Dixon and his team quickly discovered that going virtual wasn’t exactly a cheap option either. “I didn’t realize how much work was involved,” he allowed. “But the good news is that we are excited about being back at planning this year’s festival. Inactivity isn’t good for anyone.”

Dixon admits that the CMW’s saving grace was their Jim Beam National Talent Search which presented new talent from across the country with the opportunity to appear at the CMW Indie Awards event. This involved a network of sponsoring radio stations each promoting new talent regionally.

“We had gotten to the point where we had all the radio stations in place and we had our crew out in Vancouver about to have the local talent perform live when the pandemic closed the whole city down, it was like Oh No, you’ve got to be kidding.” Dixon bemoaned. “So we decided to switch to a virtual presentation for all the acts and we crisscrossed the country recording the artists. Which was great because all of the artists actually performed in recording studios or rehearsal halls. This format became quite popular. And so we repeated this process for this year’s Virtual Awards. It’s still in the can, it’s not finished yet but that process kept the staff alive, if it had not been for that, things would have been pretty gruesome.”

When it came to plotting how to execute the guest speakers virtually, Dixon was initially horrified at the idea of linking up so many people with all the technical hitches this could incur. “But after spending more than a year on Zoom communicating with people I can relate to those parents teaching their children online and band members composing with each other online, so I guess this form of communication is becoming the new norm.”

By going virtual, Dixon could attract a wide variety of talent who were easier to book when they were going online from their homes or offices rather than flying them to Toronto for the actual conference. “When you are flying people in from everywhere, they all have their own personal agendas,” Dixon noted. “Based on the virtual thing, you can generally find a window of opportunity, especially if it’s someone important.”

Topics of conversation will include new themes such as performing live stream, box office safety practices, how to utilize your downtime and even racism issues. Dixon notes that by registering to the CMW platform, delegates can get an instant video call with some of the speakers, leave a message or set up an appointment for the future. He allows that some of the guests will be pre-recorded to avoid the risk of technical difficulties.

One of the biggest challenges and one of the most innovative changes comes with the talent showcases, where every act will be pre-recorded and will be presented in a way that delegates will have constant access to them instead of the previous system where you had to pick and choose who you wanted to see. Now all of the artists will be available to be viewed constantly over the next six months and each profile will feature information on each act, mentioning whether they are looking for a manager, agent or record company contact. “It will be like a virtual talent directory” Dixon enthused.

Understanding that the key element of any successful conference is the personal inter-relationship between delegates, Dixon feels there are obvious distractions in viewing the conference from home and although this type of environment may be the way of the future, he feels the idea of bumping into a colleague at the event and going for a drink at the bar will always be an important element of a successful conference.

“I can see us talking about a hybrid event, half live and half digital but you can never replace the concept of meeting other people,” Dixon remarked. “That atmospheric stuff is so key. Once you check into the conference you are part of it, that’s what makes it work.” 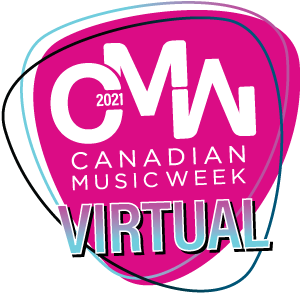 Register to attend this year’s CMW Conference,
there are two types of registration available