What a long strange and wonderful trip it’s been. It seems appropriate to paraphrase this album title when describing the history of Canada’s most enduring magazine, Music Express, which celebrates its 45th anniversary this month.

The wonderful part of the trip begins with the magazine’s impressive reach as it is the only contemporary publication in the history of the Canadian music industry to execute national record retail circulation via A&A, Music World and Kelly’s (western Canada), and national newsstand circulation through Gordon & Gotch distribution.

Basically, by the mid-1980’s you couldn’t pass by a record shop or newsstand in Canada without seeing a prominent Music Express display, touting front cover exclusive stories and photos of the likes of Loverboy, April Wine, David Bowie and Tom Petty. But before we get too far down this long trip we should go back to the magazine’s humble 1976 beginnings in Calgary.

In doing so we discover that both the musical Stampeders, who had CanCon hits like “Carry Me” and “Sweet City Woman”, and the CFL’s Calgary Stampeders played roles in the origin of the magazine. You see, back in ’76 Music Express founder/editor Keith Sharp was a rookie sportswriter for the Calgary Herald covering stories like the gridiron Stampeders when a rock and roll opportunity came knocking at the door.

“The idea for the magazine was sort of fueled by revenge motivation,” Keith recalls. “I was looking for something different to do to avoid my annual Calgary Stampede rodeo assignment so I thought about covering the Stampede’s entertainment stuff at night. The entertainment guy at the Herald (Eugene Chadbourne) was this classical jazz guitar player and he was totally inept at covering contemporary music. He agreed to let me give it a try, and my first story would be about the Stampeders who had a couple of massive global hits and were coming back to perform in Calgary at the 1976 Stampede where they were seen as returning hometown heroes. I literally spent the day with the band doing this big story, which was supposed to run on the Saturday following their Thursday concert.

But this same entertainment guy was covering the concert and he absolutely torched them. It was kind of like Bruce Springsteen going back to New Jersey and being trashed. The paper felt that because the concert review was so negative and my story so positive, they couldn’t run both so they pulled mine from the Saturday paper. I was so upset and felt I had to do something.

The Calgary Herald was the western bureau for Canadian Press, the national news service, and we fed them stories. I gave the lady at the bureau my Stampeders story and asked if they could use it. About three weeks later she came back and said that 18 regional newspapers had picked up the story and ran with it. Ironically, the only place it didn’t appear was Calgary.”

And so it began. The Stampeders weren’t the only band that was snubbed by the Calgary Herald. Many of the artists and repertoire reps at the various record companies were complaining that their acts were receiving no coverage from the Herald. These reps saw what had happened with the Stampeders story and they asked Keith to do something to help them out. It was like a call to arms.

“Through the months of July through September I literally interviewed everyone that came through Alberta,” Keith says. “This included The Bay City Rollers, Randy Bachman, Al Martino, Olivia Newton-John and Trooper. I just threw it all together in order to get the stories published.

The head of the Western Canada Department of Polygram Records, Ken Graydon was also a big help initially, as he suggested that I send some copies of the magazine to the record companies in Toronto to show them what I was doing.  I got a call from Terry Magee at Columbia records in Toronto and he wanted to know when the next issue was coming out. I thought to myself, ‘Oh no, I have to do this again?’

But coming from Manchester, I realized that Canada did not really have a national music magazine like the New Musical Express in England. So with the growing support, I was receiving for my magazine, I thought that maybe Alberta Music Express could fill that void.”

Helping Keith make the decision to leave the Calgary Herald to devote his full attention to the music magazine was Conny Kunz, affectionately known as the Dragon Lady. Keith met Conny when she was working as an accountant for Calgary’s Refinery nightclub manager, Lou Blair who had expressed interest in a potential investment in the magazine. While that did not pan out, Conny was intrigued by the magazine venture and she offered to strike up a partnership and financial backing. Her previous expertise allowed her to run the business as well as design the magazine.

“Conny was brilliant,” Keith begins. “She gave me the push in the back that I needed.  I was getting internal criticism from the Calgary Herald about conflict of interest and when it got down to what I should do, she was the one that said let’s do it.  She  provided the impetus for us to go full time.”

As luck would have it, there was a development in the Canadian music industry timed closely to the launch of the Alberta Music Express, which would greatly assist the publication. Recent Canadian Radio-Television and Telecommunications Commission (CRTC) regulations meant radio stations had to play 30% Canadian content. This led to a surge in new record companies cropping up and many new artists vying for airplay and looking for some much-needed exposure.

“Almost as the magazine came out independent labels like Anthem, Attic and Aquarius were springing up, and out west, it was Mushroom and Casino Records,” Keith explains. “Radio realized that they couldn’t play just Anne Murray or Gordon Lightfoot so they had to find new sources of music. All of the major labels that had established themselves in Canada also realized that they would have to commit to developing a domestic roster.

So suddenly you had record labels wanting to hype new releases by Rush. April Wine and Max Webster, as well as fledgling indie labels trying to promote their rosters. They were all fodder for interviews and most of the newspapers really didn’t have music people covering the scene very well.” 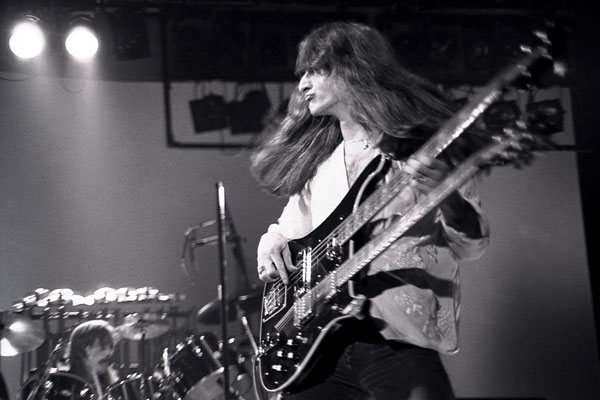 “Suddenly, we had this magazine that everyone was starting to know about and we were covering domestic interviews. Of course, the artists were all happy that they were getting coverage. It legitimized them. I’m getting a lot of feedback right now on our 45th anniversary from artists that are saying ‘You’ve been there right there from the beginning’, and ‘You’ve been supportive of us and helped our career’. You appreciate that kind of gratitude and the fact that you were actually able to perform that kind of thing with them.”

“I’d like to congratulate Music Express for 45 rocking years, and also for the kind awards they gave way back when I was just getting started.

I still have those awards cluttering up my office 100 years later, and no you can’t have them back

While the then renamed Music Express thrived for several years, by 1979 the publication had outgrown Calgary and it was time to consider moving to a major market. At the time there was a definite east-west split in the music industry. Hot spot Vancouver was represented by the powerful Bruce Allen who managed Bryan Adams, Prism and Loverboy, and Keith’s first inclination was to go west, young man.

“In late August 1979, Conny and I went out to Vancouver to basically set up shop. People like Bruce Allen and Sam Feldman were very supportive and felt that Vancouver should have its own national music magazine.”

I flew to Toronto to tell all of the record companies about our decision, but on the day that I arrived ‘The New Music’ magazine, which was based in Toronto, folded. People that I talked to insisted that we come east before someone else came along to take that spot. During those couple of days of meeting so many people who were supportive of us, we made the decision to come to Toronto. So in February of 1980, we made the move to Toronto and set up shop at 209 Kingslake Road, just across the street from Seneca College.”

Full disclosure, this writer was a New Music staffer and no one could have been happier about Keith’s new geographical choice for the magazine. Bruce Allen likely wasn’t as thrilled, but this didn’t stop him from working with Keith on a new magazine offshoot, the establishment of the Music Express Awards show in 1983.

“Bruce Allen was really upset that the phenomenal debut album by Loverboy, a band he managed, was not even nominated for Best Group or Best Album at the Juno Awards,” Keith recalls. “That album sold 700,000 copies in Canada and 400,000 in the U.S. There was a big furor at the time that the Junos were fixed and all of the record companies kind of conspired amongst themselves to determine who won.

I think our awards were developed as much out of spite for the Canadian Academy of Recording Arts and Science (CARAS), whose members vote for the Juno winners. Bruce worked with me on it and we chose Montreal because the Junos were always held in Toronto at that time. Long John Baldry along with Francophone Nanette Workman were the hosts and they were absolutely brilliant.

The show was really well done and tightly edited and was the first to utilize music videos. It was produced by Andre Perry who owned the renowned Le Studio in Morin Heights Quebec and famously recorded John Lennon/Yoko Ono’s “Give Peace A Chance” in Montreal’s Queen Elizabeth Hotel…to be continued