Toronto, ON – In the wake of their full-length debut The Union earning a 2015 JUNO Award nomination for Rock Album of the Year, Kingston’s The Glorious Sons today announced their first North American headlining tour. The Contender Tour, named after their current single which is well on the way to becoming their fifth consecutive Top 5 Active Rock Radio hit, kicks off September 13 in Sterling Heights, Michigan, and includes 20 headline dates in the United States anchored by festival performances at Chill On The Hill (with Weezer), Louder Than Life (with Rob Zombie and Slash) and Rock Allegiance (with Rob Zombie and The Temperance Movement). Following that, the band embarks upon 25 headline shows across Canada (more to be announced), concluding with a hometown show on December 27. Supporting The Glorious Sons will be Victoria, B.C.’s Northcote and Toronto, ON’s Poor Young Things on all Canadian dates except where noted below.

“It’s been two years since our first headlining tour across Canada,” says vocalist and lyricist Brett Emmons. “Since then, we’ve released The Union, supported bands like Airbourne and The Trews, but headlining gigs is great. It’s easier to feel free when you have an ownership over the stage. What separates our band from a lot of others is the reckless approach we take to live shows. We’re not scared of anything other than sending a fan home unhappy.”

Comprised of vocalist/lyricist Brett Emmons, guitarists Jay Emmons and Andrew Young, bassist Chris Huot and drummer Adam Paquette, The Glorious Sons burst upon the Canadian music scene in 2013 with the EP Shapeless Art, produced by John-Angus MacDonald of The Trews. After winning 97.7 HTZ-FM’s Rocksearch competition, the band again worked with MacDonald on The Union, along with producer Gavin Brown who helmed the eventual singles “Lightning” and “Heavy.” The latter track was most recently heard as the official theme song for the WWE pay-per-view event, “Battleground.” On top of garnering a JUNO Award nomination for The Union, the Glorious Sons were also named Group of the Year and Rock Group of the Year at the 2015 Sirius XM Indie Awards.
Photos by: Ted Van Boort. 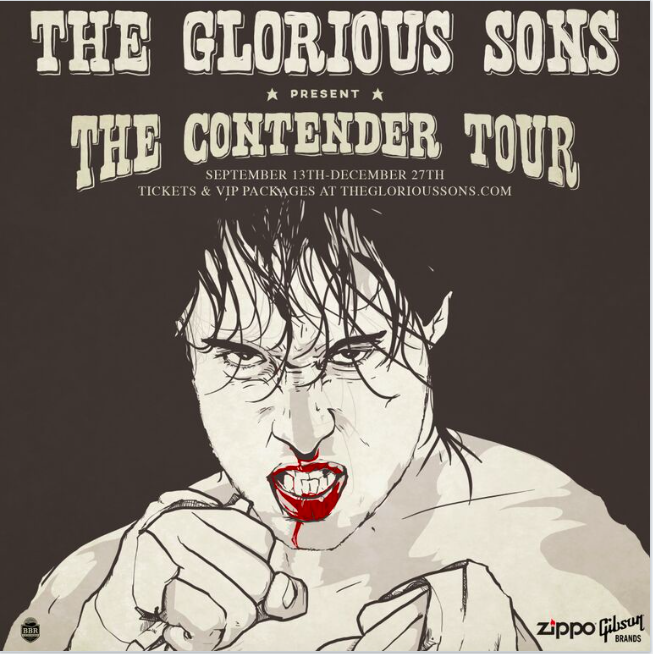