To support the release of her new disc, Foley will embark on an extensive tour schedule that includes both an official showcase at the upcoming September Americana Music Conference in Nashville, as well as a set at the Kessler Day Party Showcase during the conference.

Foley also shot videos for three songs from the new album that were directed by Tim Hardiman, who directed the latest Black Keys video.

Pinky’s Blues is the follow-up to Sue Foley’s breakout album The Ice Queen, released in 2018. Foley’s new album is a raw, electric guitar-driven romp through the backroads of Texas blues, with Foley’s signature pink paisley Fender Telecaster, “Pinky,” at the wheel.

She won “Best Traditional Female (Koko Taylor Award)” at the 2020 Blues Music Awards in Memphis, was nominated for a Juno Award (Canadian Grammy), and she took home the award for “Best Guitar Player” at the Toronto Maple Blues Awards.

Foley and producer Mike Flanigin decided to make the album in the middle of the COVID lockdown in 2020.

“Mike, drummer Chris Layton and I had just finished making Mike’s album, West Texas Blues, and we needed another challenge to keep us busy,” Foley says. “And because we’d been hanging out together we were comfortable in each other’s presence, and this would be a very low-key closed session. I brought in Jon Penner to play bass, who was my first bass player and had been on all my early records.

So just the four of us along with engineer Chris Bell went into the studio and recorded the entire album in three days. What you’re hearing is live, off the floor, in the moment the music was played totally spontaneously and, mainly, improvised. And, we wanted to make something representative of the Texas blues that we had been schooled on in Austin. So, we picked great songs and I wrote a few of my own to round things out. Everything on it is a labour of love.”

Foley considers her guitar a living extension of who she is and it helps guide her through the rambunctiously-deep renditions of everything she performs. It was while playing Pinky and doing a series of live-streaming events with Mike Flanigin that much of Pinky’s Blues came together.

“During the COVID lockdown, Mike Flanigin and I had started a live-stream show called ‘Texas Blues Party’,” she says, “and all we were doing was live-streaming from Mike’s house, just the two of us along with a drum machine and playing and talking about the history of Texas blues. It was a fun concept and it ended up being the foundation for both Mike’s album and mine.

We called Angela Strehli one day and ended up learning some of her songs. I think she’s one of the most soulful blues singers there ever was. And besides being such a great singer Angela is also a wonderful songwriter, so I was thrilled to be able to include two of her incredible songs on this album.”

As life turned inward throughout 2020 and now into 2021, everyone has had to learn new ways to live and relate to not only others but to the whole outside world. In some ways, many days feel like we’re all back in school again, feeling our way through the new fundamentals of living.

Sue Foley’s life has been an exploration of the blues and so much more. Leaving Canada as a young player, she knew she had to go where the music thrived. All her years in Austin, and including those when she left to learn new approaches to life, have all come together on PINKY’S BLUES.

“The fact that I have ended up back in Austin just seems right,” Foley says. “My home is Canada and I definitely identify as a Canadian. But I had a yearning for this music and I can’t even put my finger on why or how. It got in my soul when I was a teenager. I guess I was open and I got imprinted by the sound and the force of blues music. I saw my first blues show at 15 and I swear I’ve never been the same. I was lucky because I was able to play with so many legends before they passed away.

That direct transmission, as we know, is what it’s all about. I have the kind of experience and education that you can’t even get anymore. In a way, it’s a big responsibility to carry the message of these giants. But even more important, it’s about finding your own voice within this framework. In blues, that takes time. The beauty of blues, and something I’ve always loved about it, is that you get better as you get older.

I’ve always been a fan of older musicians. There’s something about the message, the life experience, the whole package. If you can keep a good perspective on life, a sense of humour, and a love for what you’re doing, you have much more to give. This is when it all really happens.” 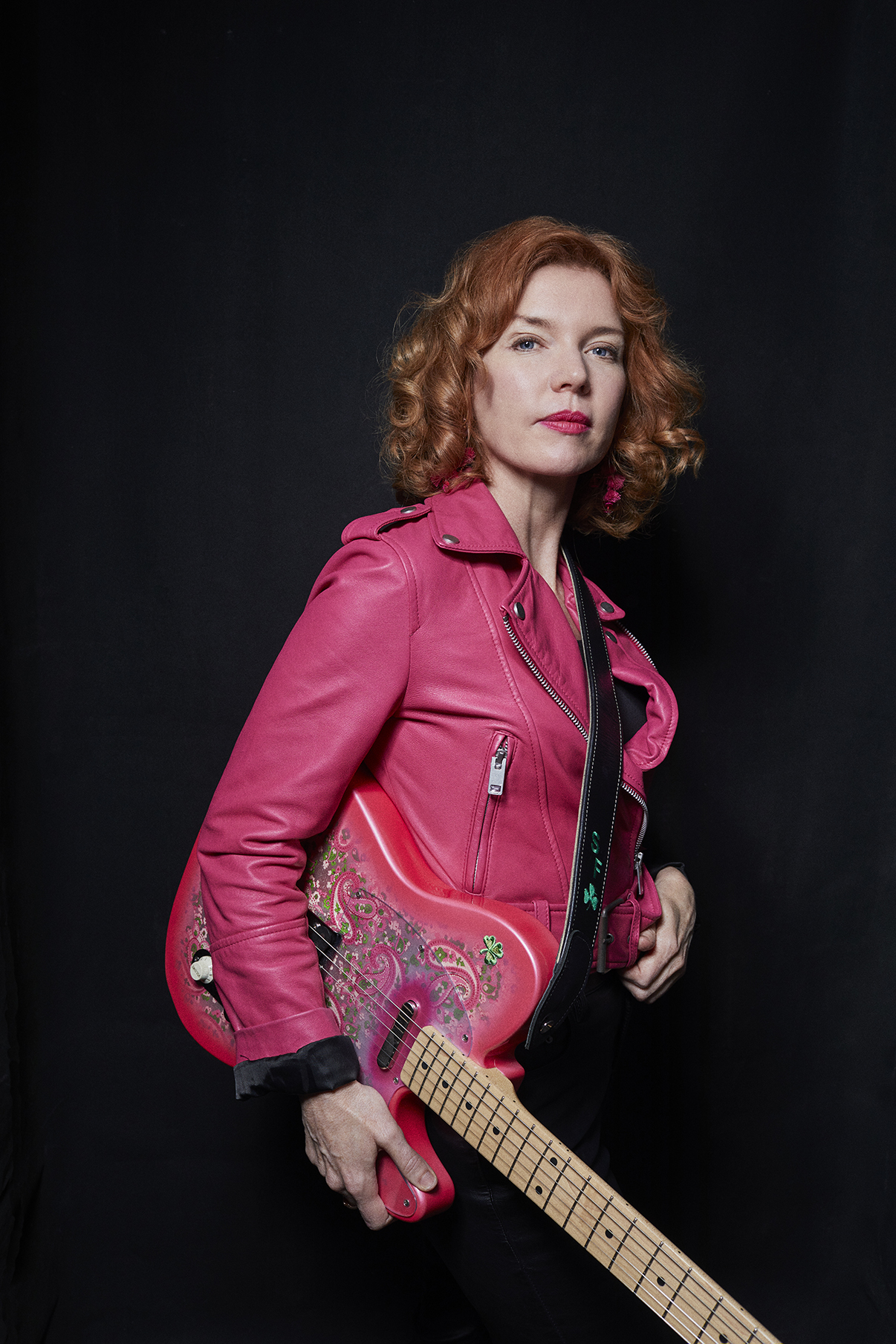 It for sure is all really happening all over PINKY’S BLUES. Sue Foley’s well-loved guitar is stepping up and stepping out, playing the music of the spheres and sharing a love for something so deep and so pure there are no words to truly describe it.

Though Foley tries: “I’ve been on the road for over 30 years. You could call that paying my dues. I’ve made over a dozen albums of my own. I’ve raised a child. I’ve bought and sold homes. I’ve had great successes and great failures. And all of this just makes my life richer and more colourful. It’s funny I keep coming back to the same 30 or 40 albums as my place of inspiration. I keep studying the same artists, over and over again. Freddie King, Muddy Waters, Memphis Minnie, T-Bone Walker, Howlin’ Wolf, etc…etc.,… You never really get there. You’re just always going.

But it’s a great trip and I never get tired of playing a slow blues. That’s the ultimate.” Today, in 2021, Sue Foley is surely one of the ultimate. With Pinky right by her side.

The “cabin fever” atmosphere created by the pandemic, also afforded her an opportunity to really map out her next moves. “I’ve had a lot of time to think about what the next chapter is,” Foley admits. “After being home for so long, all I really want to do is turn up and play my guitar for as many folks as I can. I can’t wait to get out on the road.”

“When the Cat’s Gone the Mice Play”

The Tragically Hip’s Live At The Roxy Set For Release

Joey O’Neil – Photo by Melissa Naef After being forced to cancel, postpone and re-adjust touring plans due to the global pandemic, Yukon-based folk-country singer-songwriter Joey O’Neil is absolutely thrilled to be back on the road this summer for what she has cleverly dubbed the Unleashed tour in...
June 27, 2022 Music Express 0

Sass Jordan can be a little bit sassy....