Skip to content
Search
Home > Featured > Fast Romantics: Too Commercial To Be Cool, Too Cool To Be Commercial.

According to Fast Romantics’ lead vocalist and chief songwriter, Matthew Angus, the band had plans for the release of their new album`Pick It Up’ (on Postwar Records) all pre-planned.  A national fall tour including a headline gig at Toronto’s iconic Horseshoe Tavern to be launched by a special pre-album surprise concert for their fans at Toronto’s Dakota Tavern.

Well, thanks to COVID-19, that tour isn’t happening and that surprise concert has now been reformatted to become a virtual live stream event August 20th at the Dakota Tavern with fans paying $9.00 to receive a unique link to the concert. Links can be obtained by contacting sidedooraccess.com at https://sidedooraccess.com/shows/nK5myE4tLsHs42NL0LTn or connecting directly to the band’s official website at https://fastromantics.com. 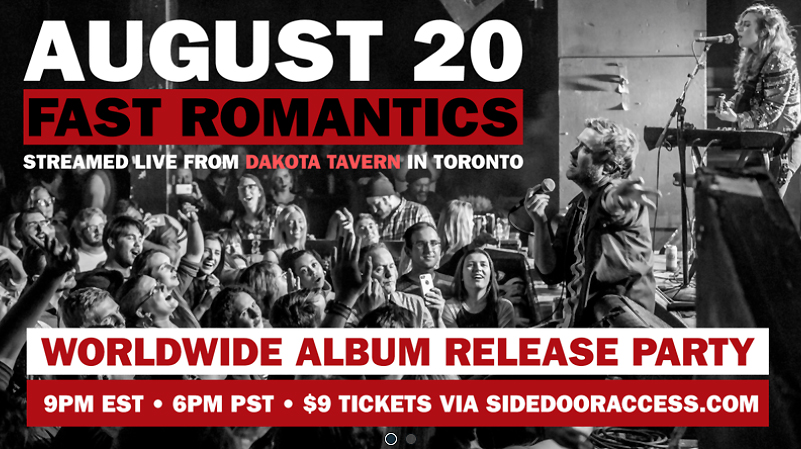 “We’ve hired a full camera crew, a top-notch director in Jared Raab (July Talk, Born Ruffians), it’s going to be like a one-hour variety show, we don’t know how it’s going to go, you can’t replicate our live show on a webcam, but we will try to make it unique” noted Angus on the phone from his Toronto base. “We know it’s not a permanent situation with this virus but we have to do something and there’s a lot of amazing, creative stuff happening when you are in this predicament.”

After relocating to Toronto from Calgary at the end of 2013 with bassist Jeffrey Lewis in tow from the band’s original lineup, Angus quickly assembled a new crew (multi-instrumentalist/songwriter Kirty (now Angus’s fiancée), guitarist Kevin Black, drummer Nick McKinlay and keyboardist Lisa Lorenz) which prompted the release of a single, “Julia” which was rated a top 5 track in 2015 by CBC Radio 2 and won a SOCAN songwriting prize in 2016, fueled by it’s unique Fred Astaire-themed video.

The success of “Julia” triggered the release of a new album `American Love’ in 2017 which set the band off on a two-year stretch of non-stop touring. But despite claims from Fast Romantics that a new album was forthcoming, Angus was being plagued by bouts of depression and anxiety and found he couldn’t complete material he had originally initiated.

“I got stuck in this self-doubt nightmare, the band moved out to California to see if I could re-focus when we heard about his virus problem and that we had to return home before they closed the borders,” Angus noted. “It was like, man! We’ve got to finish this thing. So we selected the eight songs we wanted, put our heads down and by working remotely between emails and video calls with each other, we managed to finish it. It was the most unique way I have ever made a record.”

Angus credits the writing of the album’s title track “Pick It Up” for providing the creative spark to bring him out of his dry spell. “That was the kick-off for getting my ass in gear,” he noted. “I’ve had constant struggles with crippling anxiety and depression. I think I wrote a pep talk to myself and the band heard it, loved it and convinced me it was a Fast Romantic’s type song and that we should go with it.”

Produced with help from Montreal’s Marcus Paquin during a strange two-week session of emails and video calls, “Pick Me Up” boasts a collection of eight songs which Angus allows, defies comparison with other commercial genres. “Some people have said these songs are love songs about politics or political songs about love. We have realized we don’t want to pigeon-hole ourselves. It’s not like we are looking for this number of hit singles or this number of people coming to our shows which is a trap.  Some people advertise us as indie rock but I don’t know what that means anymore. I don’t think we sound like Arcade Fire and some people have compared my voice to Neil Diamond!

“I get why people need to do it (make comparisons), we all need a point of reference,” Angus added. “But if people could just listen to our band for more than 10 or 15 minutes and judge us on our own merits, they would be fans of what we do.”

Other songs on the album. “The Rules” deals with Angus’s personal battles with school bullying “I was that scrawny, white, ginger-haired kid that was always picked on” but that song has also taken on additional victimization sentiments based on events that are currently happening in the USA. “Hallelujah, What’s It To Ya” question’s his own thoughts about faith and religion saying that even with the realization that religion has in his opinion, outlived it’s usefulness and doesn’t resonate anymore “faith in each other, in fundamental goodness, in beauty, in celebrating life while we are alive, that’s faith all the same.”

“Only People” deals with the fear that eventually the people that you love are going to fuck up, leave you or worse while “Do No Wrong” is, according to Angus, the record’s kitchen sink song, which, like “Julia” is an anthemic, up-tempo pop track which doesn’t fit in with album’s overall vibe but found a place as the album’s closer. Which explains why the band segued into that track with a 40-second non-sensical instrumental called “Iso Radio” which also includes a static radio broadcast.

“We knew we wanted to put “Do No Wrong”, that crazy banger, at the end but we also know that it doesn’t represent music we are making now“ Angus explained. “So we decided that if we are going to put it on the record, we knew we had to make some bridge piece of music between ‘Top Of The Mountain’ and that song. So I got this crazy app that lets you randomly tap into radio stations somewhere in the world and I recorded the first thing I connected with, which was some crazy play about aliens or something.”

In summarizing the Fast Romantics, Angus allowed that he has been on a personal journey of discovery since launching the original band back in Calgary In 2009. That the current band is an evolution of that process and he should have actually changed the band’s name after re-forming in Toronto as their previous album, `American Love’ is the first true indication of a sound he had been striving for.

“We were too commercial to be cool but we were also too cool to be commercial,” Angus analyzed. “We’ve always been riding the tightrope of our own identity. We are really hanging on to the idea that we spill our guts out on tape and that’s enough for enough people. I refuse to play that music genre game.”