Following over a year and a half of being away from the road due to the Covid-19 pandemic, acclaimed indie-rock band Fast Romantics are thrilled to finally be able to announce Canadian dates in support of their critically acclaimed full-length album, Pick It Up for Ontario and Quebec.

The first and only ‘Pick It Up’  tour to take place, the 11-date live in-person tour kicks off October 16 and will conclude with two exhilarating back-to-back hometown shows at the legendary Horseshoe Tavern in Toronto on November 5 and 6. Tickets for the dates are available NOW and can be purchased online at fastromantics.com.  Special guests for the dates will be announced in the coming weeks. A complete list of dates can also be found below.

“A  year ago, we put out our “pandemic record” PICK IT UP, and we never got to tour it. Today we get to right that wrong, by announcing 11 dates in Ontario and Quebec,” shares lead vocalist Matthew Angus. “We’re gonna finally celebrate the record with real humans, together in a room at last, together at last. There’s no way to describe how good the whole thing feels. Feels like a rebirth. A coming out of a cave. We’re so hungry for it that. I can’t promise  I won’t come a little unhinged up there, but the kind of unhinged that I think we’ve all been saving up these past couple of years. Not sure what exactly to expect when we get up there, but I know they can’t end up being anything but the most special kind of  shows.”

In anticipation of their tour announcement and to celebrate the record they released during the pandemic, over the course of July, Fast Romantics have been sharing a bit of a visual history of the band by posting all of their music videos via Instagram/IGTV.

Today, as a thank you to fans and to spark some initial excitement about the forthcoming fall tour dates, the band has re-released their pandemic album release concert that was originally filmed live at the Dakota Tavern in August 2020. The unique, one-shot concert, which was directed by Jared Raab  (July Talk, Arkells) and featured special performances by Dave Monks, Sameer Cash, and Lenny Bull, is now free for all to view; uncut from its original live recording, mistakes and all on YouTube.

A  remixed version of the concert is also now available to purchase as a high-quality live concert album with 100% of the proceeds going to the Indian Residential School Survivors Society. 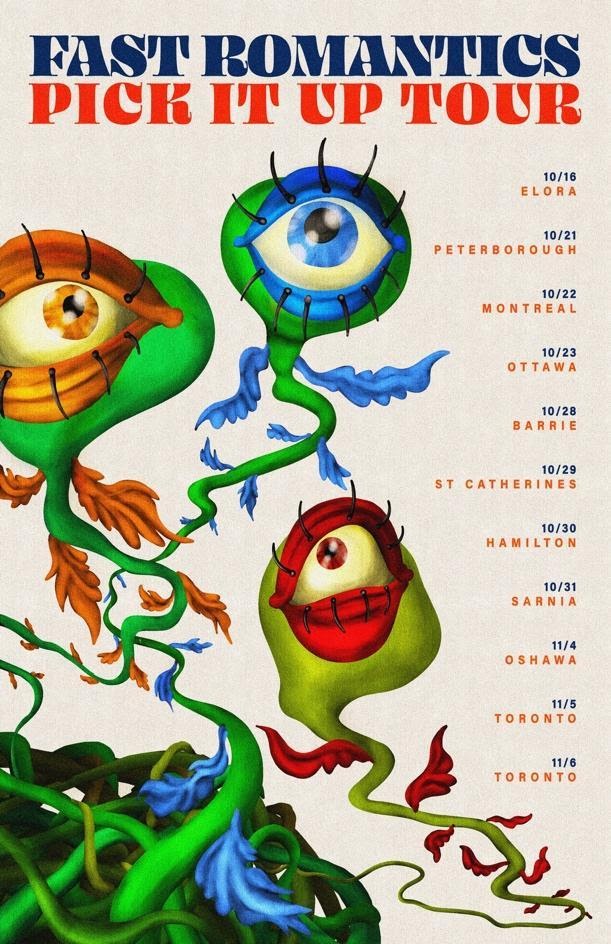 **Pick It Up Canadian Tour Dates**

In the two years following the release of their 2017 critically acclaimed sophomore album American Love, which CBC’s q dubbed “a revelation of a record” and featured both the “triumphant”, spirit-lifting pop-rock hit “Julia” and the anthemic commercial radio success, “Why We Fight”, Angus found himself prolifically crafting song ideas. Plagued by what he now describes as “a paralyzing whirlwind of self-doubt paired with an extreme desire to find some kind of nebulous ‘different’ thing”, the songwriter left the majority of the songs that he and his bandmates spent countless hours working on in the studio, unfinished. The one exception being the infectious CBC chart-topping single “Do No Wrong”, which the band dropped in the Spring of 2019. When not in the studio, Fast Romantics found themselves on the road touring across North America, but despite promises made to fans from the stage, there appeared to be no sign of a finished record insight.
Becoming increasingly frustrated with the standstill that the band had found themselves in and in an effort to once again find their footing, the six-piece took a retreat to California. While there, news of the Covid-19 pandemic was brewing, but when the trip had to be cut short due to rumours of border closures, it was on the tense flight back home that Angus finally snapped out of his longstanding funk. “We had so many songs we were proud of. And we knew we had more than just one album. It was an embarrassment of riches. The world was telling us life was short. It was time to finish something.”
And so, as the world hit the brakes and went into lockdown, Fast Romantics put their foot on the gas. Quarantined away in their separate apartments, songs were divided into two distinct records over emails and video calls. The first record they would finish would become Pick It Up.
Self-produced with additional production and mixing by Montreal’s Marcus Paquin (Arcade Fire, The National, Timber Timbre), Pick It Up is a collection of clever, deeply honest songs that reflect the time in which they were written. Featuring singles, “Hallelujah, What’s It To Ya?”, “Pick It Up”, “Only People” and  “Made For You”, Pick It Up showcases lead vocalist Matthew Angus’ finely-honed artistic vision and songwriting craft. Packed with infectious melodies that are sure to get stuck in your head for days, and relatable, thought-provoking narratives, Pick It Up explores the dualities we face as humans and the complexity of our emotions. The title track was inspired by Angus’ lifelong battle with depression and anxiety and acted as a personal pep talk for the singer as he overcame months of crippling depression; “The Rules” addresses childhood bullying and the victimization of marginalized individuals and the triumphant “Hallelujah, What’s It To Ya?” sees Angus, although no longer religious, reflecting on his religious upbringing.
Website | Instagram | Facebook

“It’s a revenge tale… but not necessarily a...