Midge Ure joins Howard Jones as his special guest for a North American Tour that kicks off today. Alongside Ure for what he calls a ‘synth heavy’ set will be musicians Dan Burton, also playing keyboard with Howard Jones and Tony Solis who has played with Midge on previous American tours.

His tour will include two solo dates at Toronto’s El Mocambo Tavern July 4th and 5th.

“What a joy to be touring North America with my friend Howard Jones again. With the emphasis on technology, quality and performance I am looking forward to dusting off the synthesizers, cranking up the guitar and playing with the brilliant musicians who will be sharing the stage with me.  We first collaborated live together back in 1989 on Howard’s ‘Cross the line Tour’ which holds nothing but great memories for me, so I am hoping to not only rekindle those but add new ones to the memory bank”.  Please see below for tour dates, with more tour dates to be added. Tickets can be purchased via MidgeUre.com.

Midge Ure was last in the states this past fall on a solo acoustic trek and has been hosting his Backstage Lockdown Club giving fans exclusive access to a series of intimate, musical events on a monthly subscription basis.

He has also been busy making music including an instrumental album: “Having hosted a radio show ’The Space’ on Scala Radio last year, where I indulged myself and the listeners to textural, ambient music from some of the Neo classical composers, I felt inspired to follow my lifelong passion for instrumental music and wrote and recorded an album which I am really pleased with. Every album I have ever released has had instrumentals but this is my first completely non-vocal album. Due for release late ’22.”

Ure also recently published a book of photographs ‘In A Picture Frame’ taken between 1980 and 1986. Moments behind the scenes with Ultravox and Visage. “Because we never toured with photographers we ended up grabbing these intimate moments ourselves. This book has my personal selection of the ones I was responsible for.” 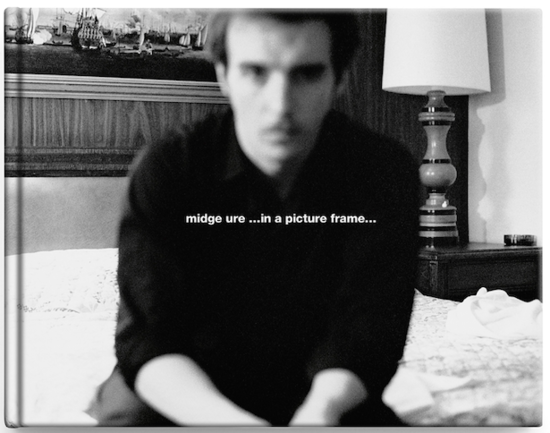 Midge Ure has an impressive catalogue fronting the groundbreaking electrorock band  Ultravox as well as being a member of such notable bands as Visage and Thin Lizzy. He helped form Band Aid where he produced and co-wrote the smash charity single ‘Do They Know It’s Christmas,’ still one of the biggest singles in UK music history. He was also one of the principle creators of Live Aid and Live 8 along with Bob Geldof.
Ure has spent most of his career touring the globe playing solo and with Ultravox who reformed in 2009. He served the notable role of MD for the Princes Trust at the Royal Albert Hall with a cast of the usual suspects including Queen, Eric Clapton, Phil Collins and Mark King. Ure is now working on three albums including a follow-up to Fragile, an Orchestrated Pt. 2 in addition to his totally instrumental album.